Engineers and producers around the world agree, there are four things which above all else determine how well your music is mixed and mastered. High end acoustic treatment of the studio, world class monitors, state of the art gear and plugins and a highly experienced, skilled engineer.

This is where Herron Island excels and why you can be confident we’ll give your music that something extra it deserves. You’ve put in the hard work to get your tracks recorded, now let us turn that into something which really stands out. We can give you the big, warm, detailed sound you expect from a commercially released CD.

Mixing speakers and mastering speakers are designed to do very different things.  Mastering speakers are like a microscope, they show up any flaw, tonal imbalance or problem in the mixes.  This is not something mixing monitors are designed for, which is why any good mastering studio will have specialist mastering monitors.  We use the acclaimed Dunlavy Viscount monitors designed by John Dunlavy. Dunlavys are the speakers of choice for mastering legends Bob Ludwig, Jonathan Wyner and many other top mastering engineers. Dunlavy speakers are lauded as the “Holy Grail” of accurate reference speakers by mastering and recording engineers in the top studios across the world. Dunlavys share the same design as the Lipinski speakers used by Bob Katz and others.  Having this level of speaker is vitally important for the kind of adjustments made during mastering.

The Chord SPM 1000B is the reference amplifier of choice for many of the worlds top studios including: Abbey Road Studios, Sony Music Studios, Decca, EMI, The BBC, LucasFilm etc… Like the Duntech monitors, a reference amplifier of this calibre is like a microscope for the mastering engineer.  Any potential problem can be identified and fixed in a way which is impossible to do on even the best mixing monitors.  Four hundred watts per channel means even the most extreme changes in low end dynamics are rendered with meticulous accuracy, showing up any potential problems in a mix.

Just like hardware, not all software is created equal.  We use only world-class software so that the quality of the sound stays pristine all the way through the mixing and mastering process.  These days almost every piece of prized hardware has been recreated in software so perfectly that even Grammy award winning engineers can’t tell the difference between the software and their hardware.  This is why so many of the top engineers in the business are now mixing entirely in software “in the box”.  Because these days it sounds just as good, and in many cases even better than the hardware. Software also has many advantages over hardware which is explained by Heron Island engineer Mark Wingfield in this video. 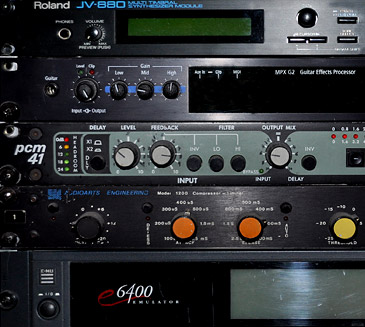 A glimpse of our hardware rack.  It’s not used much these days because software emulations sound as good or better.  Also keeping things in the box means you don’t loose quality converting the digital signal to analog and then back to digital again.  That’s a lot of converting, and you loose quality each time you do that.  So if it’s done during mixing and then again during mastering, your music has gone through digital converters five times, and each time the quality is degraded. Staying in the box avoids all that and keeps all the quality of the original recording.